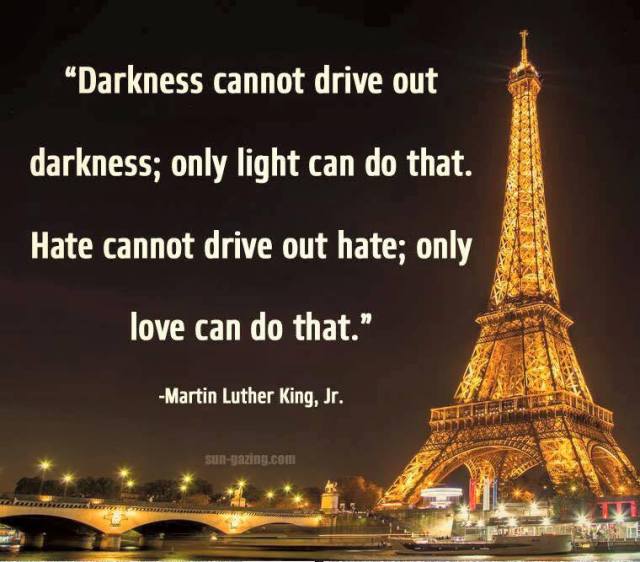 Religion News Service report – World religious leaders and institutions – from Pope Francis to the leaders of Al Azhar University in Egypt – condemned the series of attacks overnight in Paris which left more than 120 people dead.
“We are shocked by this new manifestation of maddening, terrorist violence and hatred which we condemn in the most radical way together with the pope and all those who love peace,” Rev. Federico Lombardi, the Vatican’s chief spokesman said in a statement on Saturday (Nov. 14).
“We pray for the victims and the wounded, and for all the French people,” Lombardi said. “This is an attack on peace for all humanity, and it requires a decisive, supportive response on the part of all of us as we counter the spread the homicidal hatred in all of its forms.”
In Cairo, Al-Azhar University, the preeminent, thousand-year-old seat of Sunni Muslim scholarship, called the attacks a criminal act, and said that “Islam denounces any violence,” the Arabic news site Al Arabiya reported, quoting Egypt’s state news agency MENA.
Reports said the cry “Allahu Akbar” was heard from the gunman, and ISIS supporters praised the violence on social media while many other Muslims condemned the bloodshed.
On Saturday morning, French President Francois Hollande said the attacks were an “act of war” carried out by ISIS militants.
In Ireland, the imam of the Al-Mustafa Islamic Centre in Dublin said his thoughts and prayers are with the people of Paris “and every other place on earth plagued by sick men with weapons and bombs.
“Terrorists have no religion whatsoever,” said the Muslim leader, Umar Al-Qadri. “Their religion is intolerance hatred for peace.”
In the United States, the Presiding Bishop of the Episcopal Church, Michael Curry, called upon “all Episcopalians and people of good will and faith to pray for those who have died.”
Iran’s president Hassan Rouhani cancelled a meeting with the pope at the Holy See, as well as the rest of his European trip which included a visit to Paris.
Rouhani had been due to arrive in Rome on Saturday for meetings with the pontiff and the Italian prime minister, Matteo Renzi.
The Iranian leader called the attacks “crimes against humanity.”
Multiple terrorist attacks in the French capital targeted civilians at a concert hall, restaurants and a sports stadium where President Francois Hollande was present. At least eight attackers also died, seven reportedly blowing themselves up while one was shot by police.
Courtesy: Religion News Service