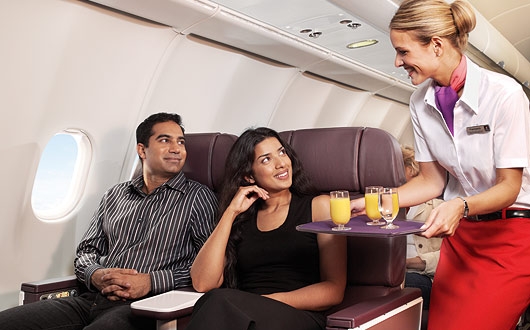 From mounting baggage costs to dwindling on-board amenities, airlines have earned themselves a miserly reputation of late.

However, it may please flyers to know there are still a few free in-flight offerings to be taken up.

As long as on board supplies will allow for it, flight attendants are usually willing to provide water for parched passengers, said a spokeswoman at UK airline, Virgin Atlantic.

According to the spokeswoman “small bottles of water” will usually be able to be supplied to passengers if they ask for it.

Most airlines that provide free food will give passengers mid-meal snacks. However, if the small pack of pretzels offered still has you feeling peckish, you can ask for seconds, according to the spokeswoman.

“If there is extra available, cabin crew are usually willing to offer seconds” she added.

Despite heightened security since 9/11 it is still possible to get a tour of the plane’s cockpit.

“If the plane is on the ground and the pilot has time, they may be able to let children into the cockpit,” said the spokeswoman,” however it is very rare.”

In spite of these offerings, it is true that on-board freebies are still limited.

Most airlines have cut free food for children and also, it seems, the traditional wing pin flight memento. According to the Virgin Atlantic spokeswoman, wing pins are no longer given away to children on their flights and it appears these guidelines also apply to other similar air lines.

It also unlikely passengers will be offered free basic medication on flights. Although airlines do carry emergency first aid kits, it is unlikely that cabin crew would be able to provide passengers with medication such as pain killers.

For those unhappy with their seat arrangement it is also uncertain whether you will able to change seats on your flight. The Virgin Atlantic spokeswoman said: “It’s unlikely, and would be dependent on how much time the cabin crew have to reseat you and how much space is available.”

Low on cash? Now there is layaway for airline tickets

5 ways to save money when traveling abroad