Daily Mail UK report – People who say they don’t identify with any religion now outnumber Christians as the country becomes less religious, a study has found.

Almost half the population of England and Wales said they had no religion – referred to as ‘nones’ – in 2014 study, almost double the figure of 25% recorded in the census just three years earlier.

People defining themselves as Christian, including Anglicans, Catholics and other denominations, made up 43.8% of the population – lower than the 48.8% of nones.

Almost half the population of England and Wales said they had no religion – referred to as ‘nones’ – in 2014 study, almost double the figure of 25% recorded in the census just three years earlier. File image

The stark decline is revealed in the report Contemporary Catholicism in England and Wales, written by Stephen Bullivant of St Mary’s Catholic University in Twickenham, south west London.

The document, which will be launched at the House of Commons today, says that both the Anglican and Catholic churches are struggling to retain people brought up as Christians.

The Church of England expects attendance to continue to fall for another 30 years as its congregations age and younger generations shun faith.

The vast majority of converts to faith come from other Christian denominations, rather than non-Christians or people identifying as having no religion.

According to the report, four out of ten adults raised as Anglican – and a similar number of those raised Catholic – now identify as having no religion. 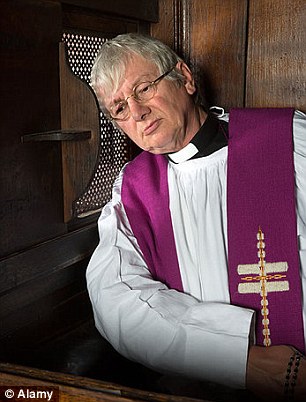 People defining themselves as Christian, including Anglicans, Catholics and other denominations, made up 43.8% of the population – lower than 48.8% of nones

London is the country’s most religious area, in terms of having the smallest proportion of people identifying as ‘nones’ at 40%.

While in Wales, almost 60% of people say they have no religion.

Speaking to The Guardian, Mr Bullivant, a senior lecturer in theology and ethics, said: ‘The striking thing is the clear sense of the growth of ‘no religion’ as a proportion of the population.

‘The main driver is people who were brought up with some religion now saying they have no religion.

‘What we’re seeing is an acceleration in the numbers of people not only not practising their faith on a regular basis, but not even ticking the box.

‘The reason for that is the big question in the sociology of religion.’

Northern Ireland, which has long been the most religious part of the UK, was not included in the data. In 2011, just 7% said they belonged to a non-Christian religion or no religion.

Scotland was also omitted from the survey, but last month a separate report found 52% of the population said they were ‘nones’, compared with 40% in 1999.

Thirty years ago in England and Wales, 44.5% of the population described themselves as Anglican – a figure which had fallen to 19% by 2014.

A spokesman for the Church of England told The Guardian: ‘We do not have an increasingly secular society as much as a more agnostic one.’  …. Read more