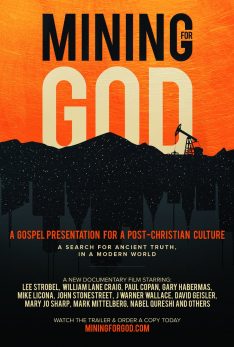 From filmmaker Brandon McGuire, Mining For God takes a look at how Christianity is perceived in todays current culture. After returning from a trip in Africa and experiencing a different kind of Christianity to his middle class American view, he went to onto the streets of America and asked people questions about Christianity. The answers he received shocked him with people holding all different manners of beliefs and confusions. He set out to produce a documentary that looks at those questions about God and to provide an educated and solid answer to those questions.

In this documentary Brandon interviews many people including former atheists and former believers in other religions along with many well educated and intellectually sound Christian scholars including Lee Strobel, William Lane Craig, Gary Habermas and J. Warner Wallace as well as others, who give a well reasoned and intellectual response that will connect with many people, without being preachy.

The documentary is very well produced and thought out and does a great job in trying to set the record straight that actually there is proof, there is evidence and it is solid undisputed evidence that Jesus existed, that Jesus died and that Jesus rose again and for those who are seeking that evidence, for those that have questions regarding proof, then this is a documentary to watch  … read more

I Am Gabriel – Christian Movie